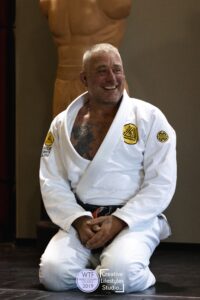 Professor Abel holds a 3rd degree black under Royler Gracie. During his path towards black belt, Paul was able to learn from top level martial artists and eventually developed a student-master relationship with Royler Gracie and David Adiv. He would spend months each year training with and learning from both men, in Brazil, New Jersey, California and across Canada.

Professor Abel started boxing as a teenager, kindling a lifelong passion for martial arts. In 1993, he started training Muay Thai and fought in both amateur and professional rings. Then in 1994, Paul joined the legendary Grappling Arts Academy. Under the tutelage of Sylvain Mulroney, Paul competed extensively, participating in challenge matches, going on to win club, regional and, later, international titles. By 1996, Paul and Sylvain were organizing and promoting grappling seminars, with the intent of providing high calibre instruction to a growing number of interested parties. Paul’s work as a seminar promoter granted him the unique opportunity to train privately with legends such as Royce Gracie, the Machado brothers, Ken Shamrock and Gokor Chivichyan, just to name a few.

In 2007, Professor Abel became the first Canadian ever to be promoted to black belt by Royler Gracie. He still travels several times per year to train with Master Gracie, to continue to increase his knowledge, and also has the privilege of regularly welcoming both Royler Gracie and David Adiv to his academy in Prince Edward Island so that his students can experience the highest level of instruction.

Professor Abel is that rare combination of fierce competitor and gifted teacher. Through his deep understanding of body mechanics and foundational techniques, Paul allows each student to develop at their own pace, providing correct and systematic instruction in a supportive environment. Embracing both the universality and the individuality of the art, Paul firmly believes that Jiu-Jitsu is for everyone, and ensures that every class contributes to each student’s progress. Paul is also well-known for his ability to prepare fighters for competition. Paul has been involved with Canadian MMA since its infancy in the 1990s. Upon his move to Prince Edward Island in 2011, he established the Wulfrun MMA Team, and has coached many fighters from amateur to the major promotions, including UFC fighter Jason Saggo. Paul is well-known for his technical expertise, and his ability to integrate the different arts into effective game plans uniquely suited to each fighter. He has a particular gift for breaking down techniques and teaching fighting fundamentals.